Thank you for reading!

Starting at
$2.99 for 1 day
Get Started
View all rates 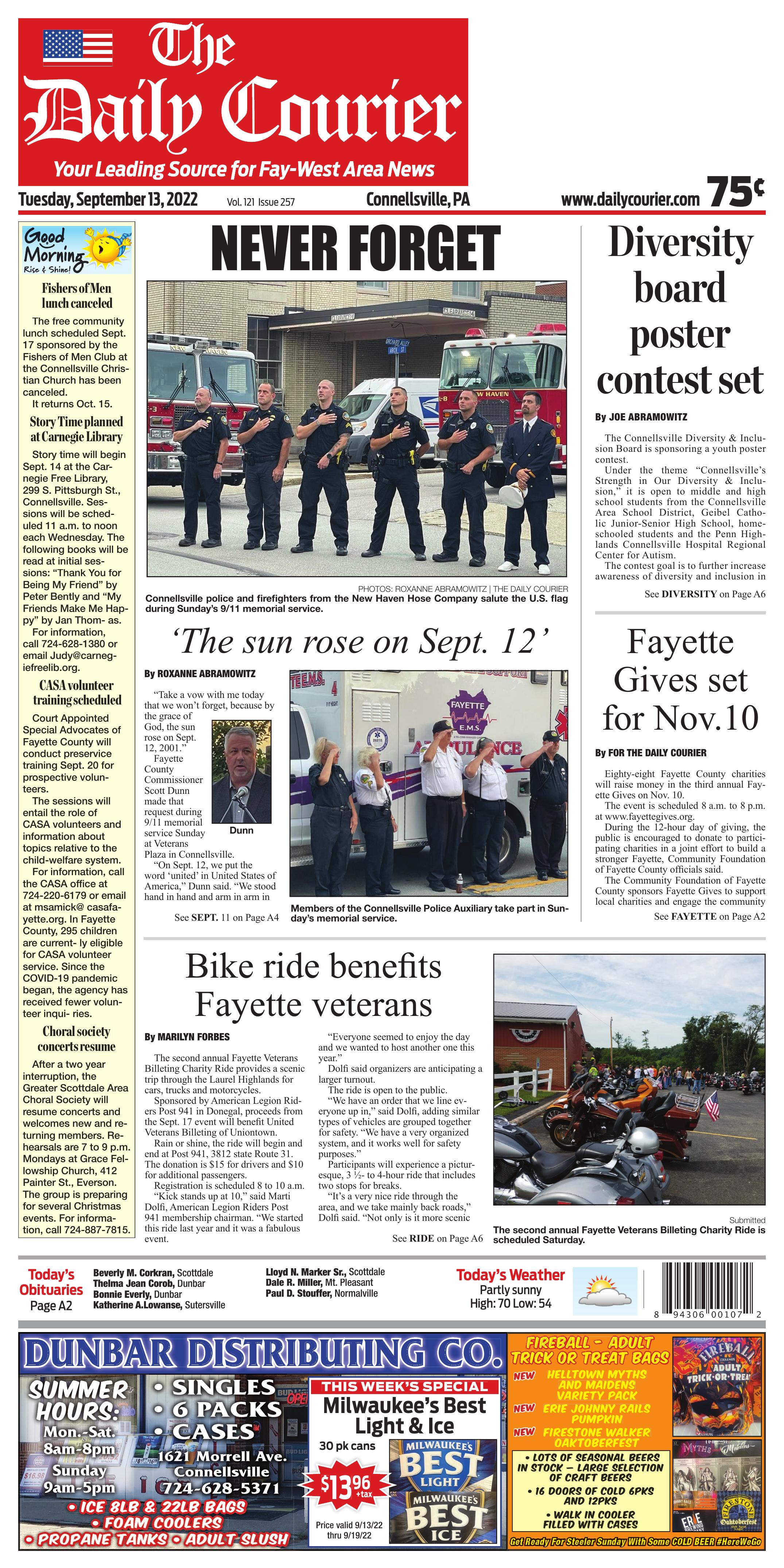 “On Sept. 12, we put the word ‘united’ in United States of America,” Dunn said. “We stood hand in hand and arm in arm in support of our great nation.”

Dunn, the guest speaker at 7 p.m. event, said the Sept. 11, 2001, terrorist attacks affected everyone in the United States.

He and other speakers said it is important to remember the tragedy and the way Americans rallied as a nation.

“On that day, we all took a vow to never forget,” Dunn said.

As time has passed, some younger Americans don’t know and possibly don’t understand the importance of what happened that day, Dunn said.

By 10:38 a.m. that day, all them were dead – victims of al-Qaida terrorists who hijacked commercial airliners and turned them into weapons.

“This day had an impact, an impact that went way beyond immediate families,” Dunn said.

He said 9/11 spawned military actions in other countries to protect the United States from future acts of terrorism.

“The impact of that day was felt by all Americans,” Dunn said. “We had the feeling of grief and hopeless and, yes, anger. Take vow not to forget Sept. 12 and that feeling we had on that day.”

Mayor Greg Lincoln said everyone who remembers Sept. 11, 2001, knows exactly where they were and what they were doing when the attacks occurred.

The terrorists crashed jets into the World Trade Center in New York City and the Pentagon in Washington, D.C.

A third hijacked plane likely was bound for the U.S. Capitol, but passengers and crew members aboard United Flight 93 fought to regain control of the airliner, which crashed in a Somerset County field.

Representing the city’s law-enforcement community, Lincoln police for their service.

“On that day, the law-enforcement officers put on their uniforms, kissed their families and left for the day, just like any other day,” Lincoln said. “But this was not going to be just any other day.

Lincoln said law enforcement and first responders are courageous and possess resolve that is strong and absolute.

“There is no harder job today than serving as a law-enforcement officer,” Lincoln said. “The job of a police officer is harder today than ever before.”

Lincoln asked the crowd to reflect on what happened on Sept. 11, 2001, and honor all first responders.

“Respect the work of police officers and first responders every day,” he said.

Jeff Layton, New Haven Hose Company chief, said normal citizens woke up on 9/11 not knowing what the day would hold.

“My fellow brothers and sisters responded to the World Trade Center knowing they probably wouldn’t return to their loved ones,” Layton said. “They made the ultimate sacrifice, and because of their actions more than 20,000 lives were saved.”

Layton said firefighters and first responders take oaths to serve and protect — and that’s exactly what they did in New York.

“It takes a true dedication and honor to be a first responder, and I commend my fellow brothers and sisters,” Layton said of their actions on Sept. 11, 2001 — the day the world changed.

“We will never forget the lives lost,” Layton said.

Matt McKnight, Fayette EMS assistant chief, said the United States experienced an international act of terrorism on Sept. 11, 2001, as terrorists tried to bring the country down.

“But all they did was strengthen our country,” McKnight said.

He said dedicated first responders rushed to each of the scenes to help others.

“The sacrifice they made that day is nothing different than what first responders face every day,” said McKnight, adding as times change, first responders become more vigilant with each call and have a heightened sense of awareness.

“But let us never forget Sept. 11, the lives lost; stories of heroism; the stories of pain and suffering years after; and those who stepped up to defend our freedom,” he said.

The Rev. Bob Strader, World Christian Outreach Ministries pastor, asked that the nation remember those lost 21 years ago including first responders, firefighters and volunteers who risked their lives.

Strader emphasized that military personnel have risked their lives fighting for the country’s freedom.

New Haven Hose firefighters displayed a large U.S. flag from atop their ladder truck. They were joined by firefighters from Connellsville Township Volunteer Fire Department.

Sponsored by American Legion Riders Post 941 in Donegal, proceeds from the Sept. 17 event will benefit United Veterans Billeting of Uniontown.

Registration is scheduled 8 to 10 a.m.

“Kick stands up at 10,” said Marti Dolfi, American Legion Riders Post 941 membership chairman. “We started this ride last year and it was a fabulous event.

“Everyone seemed to enjoy the day and we wanted to host another one this year.”

The ride is open to the public.

“We have an order that we line everyone up in,” said Dolfi, adding similar types of vehicles are grouped together for safety. “We have a very organized system, and it works well for safety purposes.”

Participants will experience a picturesque, 3 ½- to 4-hour ride that includes two stops for breaks.

“It’s a very nice ride through the area, and we take mainly back roads,” Dolfi said. “Not only is it more scenic that way but also safer for everyone.”

After the ride, participants are invited to Post 941 for lunch. The event will include a 50/50 drawing and gift-basket auction.

“One of the most frequent requests we received is housing assistance,” said Metros, adding many need help with utility bills

Some veterans seek help with drug and alcohol problems, as well as mental conditions.

“Sometimes they require a place to stay while they pursue employment,” Metros said. “Billeting was created to give them the opportunity to have a safe, clean and warm place to live while they are attempting to get their lives back on track.”

Fundraising events are the lifeline of the organization.

“We are totally self-funded,” Metros said. “We raise funds through events like spaghetti dinners, soliciting private donations and, thankfully, with assistance of groups like the Legion Riders.”

Dolfi said participation in the ride is not required to attend the Post 941 event and purchase chances for the 50/50 drawing and the gift-basket auction.

Dolfi said the organization has sponsored fundraising rides in the past for a variety of causes but might plan future rides – possibly each year — in support of United Veterans Billeting.

The Connellsville Diversity & Inclusion Board is sponsoring a youth poster contest.

Under the theme “Connellsville’s Strength in Our Diversity & Inclusion,” it is open to middle and high school students from the Connellsville Area School District, Geibel Catholic Junior-Senior High School, home-schooled students and the Penn Highlands Connellsville Hospital Regional Center for Autism.

The contest goal is to further increase awareness of diversity and inclusion in the Connellsville area, said Dr. Heidi Henry, board president.

One student from each school represented will receive a $100 cash prize. The Diversity & Inclusion Board will judge the entries, Henry said.

Henry said board members are working to establish contacts with school officials in efforts to generate participation in the poster contest.

Posters will be printed and displayed in schools, local businesses and on social media.

Students can use any medium – including paint, pencil and digital drawing programs – to create their entries, sizes of which must be 8.5 inches by 11 inches.

Posters must feature students’ original work and be designed for general audiences. Depictions of drugs, alcohol, tobacco and guns are prohibited.

Each entry most must include student’s name, phone number, grade level and school.

Submissions must be received by the Diversity & Inclusion Board at Connellsville City Hall, 110 N. Arch St., by 4 p.m. Nov. 1.

For questions, email connellsvilledandiboard@gmail.com or connect through www.ConnellsvilleDiversityInclusion.org or Facebook.

Money for prizes and other contest costs was provided through a donation from the Fayette County Cultural Trust. The donation also provided money to establish the Diversity & Inclusion Board website, Henry said.

In its second year since being established by Connellsville City Council, the Diversity & Inclusion Board has been busy.

On June 18, the board sponsored its second annual Juneteenth celebration to mark the date — June 19, 1865, in Galveston, Texas — generally held as the end of legalized slavery in the United States.

Staged at Veterans Plaza next to City Hall and along North Arch Street, the event featured speakers, music, food and information booths.

While observed in various forms over the years, Juneteenth now is a national holiday.

A week later, the board sponsored Pride Fest in Yough River Park.

It was staged in conjunction with Pride Month, observed in the United States in June to celebrate the lesbian, gay, bisexual, transgender and queer communities – commonly known as LGBTQ.

Organizers said the Pride Fest goal was to sponsor an event open to all and to establish Connellsville as a welcoming and safe place.

On the heels of those successful events the board wanted to sponsor a fall event in support of diversity and inclusion, Henry said.

Henry said she has been pleased with the board’s achievements and level of public participation in just two years of existence.

“We are a small board, and for as small as we are, we have done some amazing things,” she said.

The event is scheduled 8 a.m. to 8 p.m. at www.fayettegives.org.

During the 12-hour day of giving, the public is encouraged to donate to participating charities in a joint effort to build a stronger Fayette, Community Foundation of Fayette County officials said.

The Community Foundation of Fayette County sponsors Fayette Gives to support local charities and engage the community in philanthropy.

This year’s 88 charities include many returning charities and 25 first-time participants.

Participants profiles can be viewed on the Charity Search page at www.fayettegives.org.

To donate during Fayette Gives, donors select one or more charities for a credit or debit card donation.

The minimum donation is $25 per charity.

Donations received at the community foundation office by 8 p.m. Nov. 19 will be boosted by a prorated percentage of the bonus pool, thanks to the Fayette Gives sponsors.

To donate to one or more charities by check, write one check for your total contribution amount and complete one Check Contribution Form to designate individual donation amounts.

On Fayette Gives day, the website will show live results and leaderboards.

Once all donations are verified, charities will receive their grant check.

Go to www.fayettegives.org to learn more.

Click and hold your mouse button on the page to select the area you wish to save or print. You can click and drag the clipping box to move it or click and drag in the bottom right corner to resize it. When you're happy with your selection, click the checkmark icon next to the clipping area to continue.